The School of Athens

Hover over the figures to see their potential identities, and click on them to read more about them.

Most of the figures have been variously identified over the years. We provide our interpretations, or several if they seem equally persuasive. 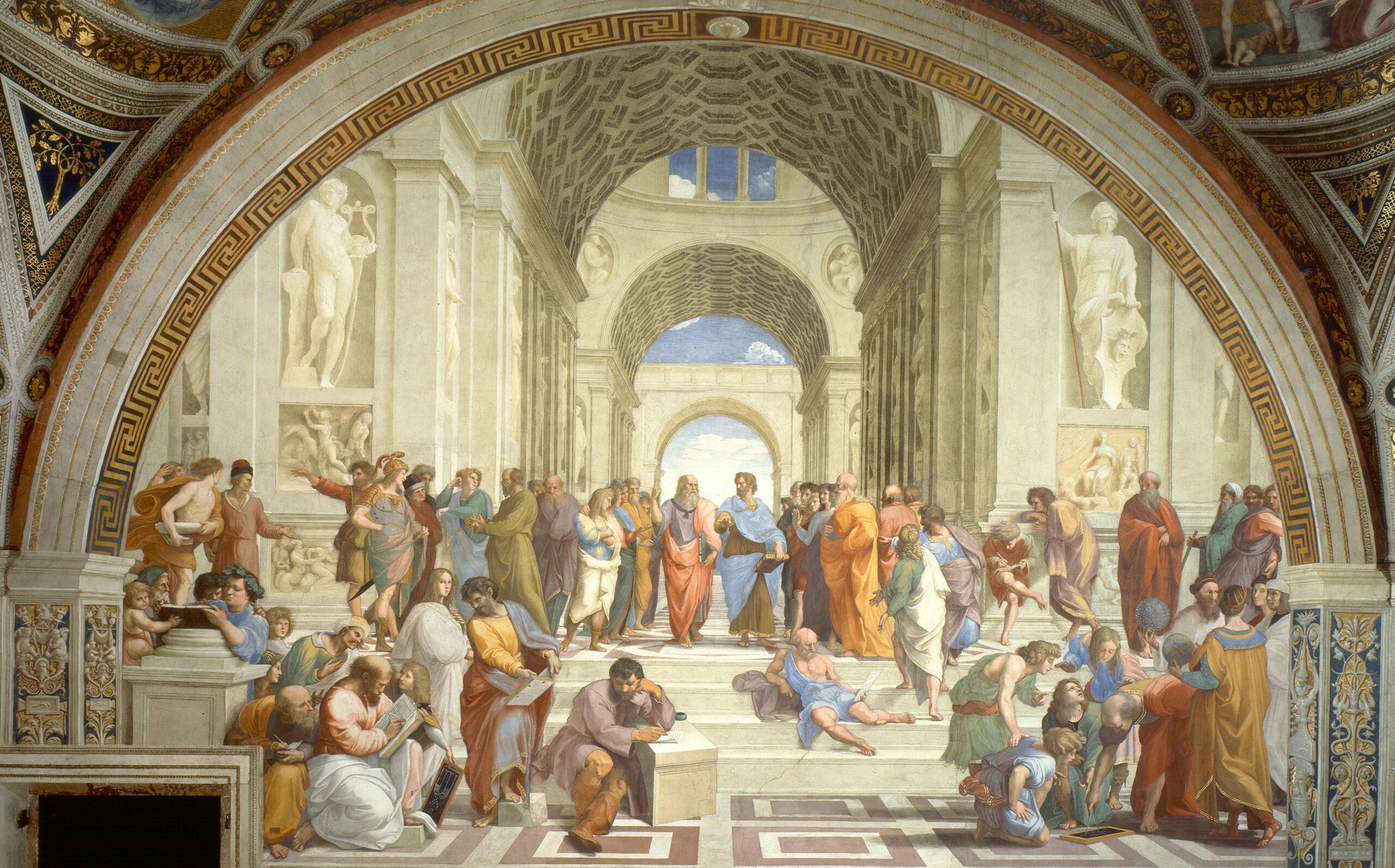 Athena is the goddess of wisdom and of war, which Raphael represents in her armor and position. She is elegantly clad for war with a wooden spear, a strong helmet, a shield with the face of Medusa, which Greek mythology says turned all viewers into stone. Although she is ready for war, she stands above the panel of peace, next to the Wall of Justice, and looking at "Mount Parnassus. This statue shows a unique combination of natural wisdom, poetry, virtue, with a readiness for action and war, which enables and protects the peace that she stands over. She models the person having gone through a liberal education.

Modeled after Raphael's teacher Leonardo Da Vinci, Plato holds his Timeaus, which gives his account of the creation of the cosmos by the Demiurge. He wears the colors purple and red, which signify the elements of the ether and fire. These colors fit Plato's philosophy because, as indicated by his upward pointing finger, he argued that reality exists in the Realm of the Forms.

Plato and Aristotle engage in peaceful conversation on important matters about what really exists. Although they both have the largest following of listeners and their figures split the room in half, they are interested in the truth about reality and the love of wisdom. While they exemplify the heights of natural wisdom, they point elsewhere. Aristotle points out both to sensible substances and across the room to the "Wall of Theology." Plato points up to the Realm of the Forms and to the key stone of the whole room, which resembles the emblem of the Church.

Apollo, the god of poetry and the fine arts, stands naked with a lyre, learning on an tree stump, looking at "Mount Parnassus." He represents the excesses of a liberal education. Unlike Athena, he is not ready for war nor is he dressed for civil society. He is "lost" in his impassioned love for finer things, which endangers any liberal artist. Although he stands in the classical contrapposto position after the Greek "Canon" of Polycleitus, he goes too far in his leaning, which turns the more natural contrapposto position into an unnatural position for a well-formed man. He also stands above the panels of the Passions of Strife and Concupiscence. Just as Athena protects the peace that she stands over, Apollo preserves the strife and lust that he stands over.

Aristotle wears blue and brown robes, which are colors that signify the elements of earth and water. He also holds the Nicomachean Ethics, which a work of the greatest influence on Western Civilization's understanding of happiness.

Plato and Aristotle engage in peaceful conversation on what is the nature of reality and how should a life be lived. Plato's Timeaus attributes the order within the nature of reality to the Demiurge, whom he thought created the cosmos. Aristotle's Ethics argues that the best way of life is the practice of virtue and the contemplation of what is true. These two questions lie at the heart of the liberal education.

Although they both have the largest following of listeners and their figures split the room in half, they are interested in the truth about reality and the love of wisdom. While they exemplify the heights of natural wisdom, they point elsewhere. Aristotle points out both to sensible substances and across the room to the "Wall of Theology." Plato points up to the Realm of the Forms and to the key stone of the whole room, which resembles the emblem of the Church.

Euclid has the features of Raphael's great mentor Donato Bramante who, as architect of St. Peter's (suggested by the vaulted ceilings of this noble edifice), was a master of geometric principles as seen in the design of his buildings. Euclid draws on a slate tablet with a compass.

Socrates is depicted as bald and snub-nosed, reminiscent of classical busts of the philosopher. He has the rapt attention of an unknown youth, Xenophon, Aeschines, and Alcibiades.

As perspective is rediscovered and mastered in Renaissance art, Raphael includes himself, along with his teacher, Perugino, on his right, with the experts of sight.

Perugino, a painter of the Italian Renaissance, was the teacher of Raphael.

These four students surround Euclid depict four stages of learning. The youth in the bottom left corner, with his eyes and fingers pointed to the diagram, is intent but still on the level of literal learning. The youth to the right, in green and looking up, turns to his companion with the excitement of dawning comprehension. That companion, in the top right, already anticipates the outcome. The final youth, standing in the top left of the group, seems to be an apprentice teacher with his pointing finger and encouraging hand on the shoulder.

All four youths are gathered around the diagram on the slate, drawing attention to the faculty of sight, which is also used by the astronomers to the right of Euclid.

Diogenes, the famous cynic, sits absorbed in his reading, with a beggar's dish in front of him.

Heraclitus, traditionally glum and antisocial, has been given the face of Michelangelo.

Below the statue of Athena is this relief of Virtue, sitting on clouds, holding one hand at her breast, the seat of valor, while extending the other toward the earth with the scepter of her empire.

Partially hidden in this picture, the full depiction is of Solomon's wise and shrewd judgment about which woman's child is the live one, and which woman's is dead.

Epicurus, pudgy and crowned with the ivy leaves of Bacchus, the god of wine, is surrounded by the very young and the very old: supposedly the only ones who seriously attended to his teachings.

The famous Alcibiades stands attentive looking at Socrates. Alcibiades is dressed for war, but his armor is beautifully embellished in gold.

This figure has been identified many different ways, but Boethius, the author of The Consolation of Philosophy, translated several scientific texts out of Greek into Latin and wrote some mathematical treatises himself, advancing science in Europe. In the painting, we see the figure copying down the work of Pythagoras.

Identifiable by his turban, the Muslim polymath Averroes looks over the shoulder of Pythagoras.

This figure is either the pre-Socratic philosopher Parmenides or the mathematician and music theorist Nicomachus.

This enigmatic group of characters have been variously identified as Aeschines, Xenophon, and Antisthenes in different combinations. They are, at least, several close followers of Socrates, although their neither their visages nor their dress identify them.

This enigmatic figure, looking out at us and not drawn in by the surrounding philosophers, may be the female Hypatia, a 4th to 5th century Greek Neoplatonist philosopher, astronomer, and mathematician.

The figure may also be a portrait of Francesco Maria della Rovere, the nephew of the pope at the time. A separate portrait of the young man done by Raphael looks similar.