This week, Drs. Andrew Seeley and Jeffrey Lehman consider logic through the lens of Aquinas and Aristotle. What is opinion? How does it relate to truth? How do these logical categories apply to our social lives? 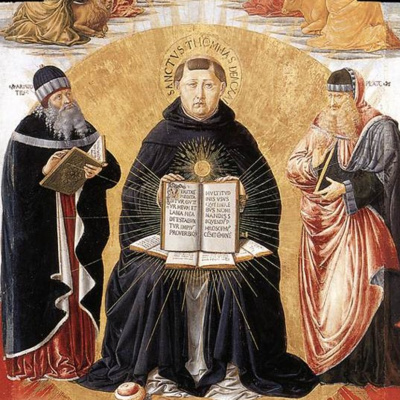 Hence in order to have certitude a judgment must be formed, bearing on that which has been investigated. But just as in the works of nature which succeed in the majority of cases certain levels are achieved—because the stronger the power of nature the more rarely does it fail to achieve its effect—so too in that process of reason which is not accompanied by complete certitude certain levels are found accordingly as one approaches more or less to complete certitude. For although science is not obtained by this process of reason, nevertheless belief or opinion is sometimes achieved (on account of the provability of the propositions one starts with), because reason leans completely to one side of a contradiction but with fear concerning the other side. The Topics or dialectics is devoted to this. For the dialectical syllogism which Aristotle treats in the book of Topics proceeds from premises which are provable. At times, however, belief or opinion is not altogether achieved, but suspicion is, because reason does not lean to one side of a contradiction unreservedly, although it is inclined more to one side than to the other. To this the Rhetoric is devoted. At other times a mere fancy inclines one to one side of a contradiction because of some representation, much as a man turns in disgust from certain food if it is described to him in terms of something disgusting. And to this is ordained the Poetics. For the poet’s task is to lead us to something virtuous by some excellent description. And all these pertain to the philosophy of the reason, for it belongs to reason to pass from one thing to another. Full Text of Aquinas' Commentary on the Posterior Analytics Writings of the Founding Fathers

If this podcast's conversation regarding the reason and passion of the Founding Fathers piqued your interest, explore our study guide on America's Founding Documents. Dr. Seeley mentioned Whitaker's Words, a project of the University of Notre Dame. The website provides an extensive grammatical analysis for any Latin word that you enter.