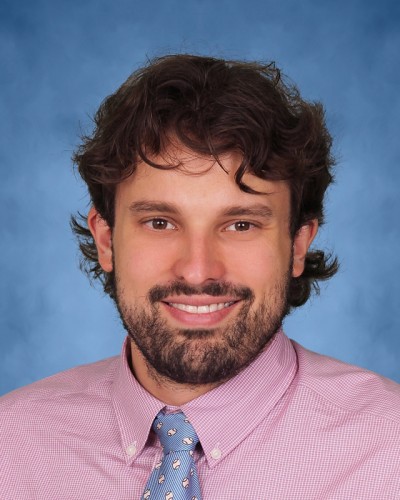 A Lover of Latin and Math

When I met William Carey this past spring, I immediately liked him because he was almost envious of the fact that I had been able to engage my college students in a semester-long study of the epitome of ancient astronomy, Ptolemy’s Almagest. Then I learned he is an honored Latinist who also loves mathematics both ancient and modern, one of the few people I know qualified to read, understand, and translate mathematical texts originally written in Latin, a practice kept up well into the nineteenth century. He is currently enjoying a few years’ sabbatical from “the tyranny of the urgent that is teaching”, throwing himself into reading T.L. Heath’s classic work on Greek mathematics and Andre Beaufre’s An Introduction to Strategy, while helping 2500 Afghan refugees find housing and furniture.

William was accidentally introduced to the study of Latin by his father, a trial attorney who enjoyed reading books he was interested in to his 10 year-old son. In the midst of reading Caesar’s Gallic Wars, he mentioned that the work was not originally English but Latin. “Why aren’t we reading it in Latin?” asked his young son. Having no answer but ignorance, they worked through Jenney’s First Year Latin together, and then went through it again. This path eventually led his father to a Master’s in Classics, an adjunct position at George Mason University, and founding The Latin Library, an online resource of original texts. It led William to excel in Latin in high school and college, winning the prestigious Marian W. Stocker Prize for the best undergraduate Latinist at the University of Virginia.

But his grandfather, a chemical engineer, gave him a love of engineering and mathematics, allowing him to work on various instruments in his garage and teaching him to code Apple IIe computers. He began college as an engineering major, but hated the culture and pedagogy: tons of work ordered to crush the spirit and a grading system designed to foster intense competition (only a small percentage of students could get A’s). “When complaints were raised about engineering students regularly pulling all-nighters in the hallways of the building, the department supplied cots.” William quickly changed majors to Classics, though his love of history (“we read great and interesting texts”) led him to the verge of a double major.

He returned to mathematics as a teacher at the classical Christian school Ad Fontes Academy. Hired to teach Latin, he was asked to fill needs in calculus and logic. It took him a few years to feel comfortable teaching calculus, but he was struck by how disconnected it was from the spirit of the rest of the curriculum. “Our school prepares students to lead flourishing, essentially human lives. But contemporary high school mathematics seems ordered to the technological needs of the 1920s, producing human computers adept at transcendental calculus. It’s like ordering your entire history curriculum to give an intense understanding of nothing but World War I.”

But William also realized that his students had a whole toolbox that he didn’t, which they learned through their 9th grade study of Euclid. Learning to present cogent demonstrations, to field questions, to imagine alternative proofs made them excellent pre-calculus students. “I worked to bring those strengths to the other math courses. Less drill, more proof. I do need to drill them in some things, but this is so that they can engage fruitfully in interesting discussions and texts.” William believes that too many classical educators exempt mathematics from classical pedagogy. “Learning to read great texts, discussion, discovery, clear and persuasive reasoning should be as much a part of mathematics as it is in English and History.”

His students respond well to his methods. His best students become delighted when they learn that mathematics is not based on arbitrary authority; they become excited to discover, they insist on knowing rather than believing. “It becomes addictive, like a drug. In one discussion, a student asked with almost disbelief, ‘Mr. Carey, is this leading to the quadratic formula?’ That completely changed his expectations for mathematics.” His students never ask, “What use is this?” “I never pretend it’s useful, and they just enjoy playing with truth. Very few high school students are impressed by career-oriented learning.”